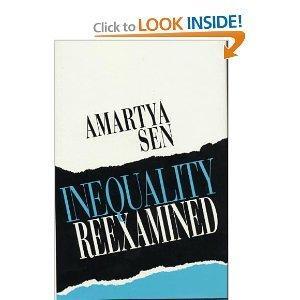 Inequality Reexamined is a 1992 book by the economist Amartya Sen. In the book Sen evaluates the different perspectives of the general notion of inequality, focusing mainly on his well-known capability approach. The author argues that inequality is a central notion to every social theory that has stood on time. For only if this basic feature is satisfied can a social theory which advocates a set of social arrangements be plausible. Taken the inequality ingredient for granted, the crucial question becomes: inequality of what? Sen answers this basic question by advocating his preferred notion of equality which is based on the capability for Functions.
Read more or edit on Wikipedia