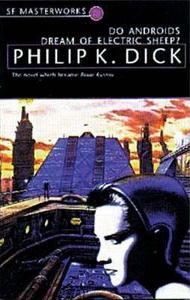 Do Androids Dream of Electric Sheep?

Do Androids Dream of Electric Sheep? (retitled Blade Runner: Do Androids Dream of Electric Sheep? in some later printings) is a dystopian science fiction novel by American writer Philip K. Dick, first published in 1968. The novel is set in a post-apocalyptic San Francisco, where Earth's life has been greatly damaged by a nuclear global war, leaving most animal species endangered or extinct. The main plot follows Rick Deckard, a bounty hunter who is tasked with "retiring" (i.e. killing) six escaped Nexus-6 model androids, while a secondary plot follows John Isidore, a man of sub-par IQ who aids the fugitive androids. The book served as the primary basis for the 1982 film Blade Runner, even though some aspects of the novel were changed, and many elements and themes from it were used in the film's 2017 sequel Blade Runner 2049.
Read more or edit on Wikipedia

This is the french version.