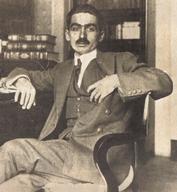 José Bento Renato Monteiro Lobato (18 April 1882 – 4 July 1948) was one of Brazil's most influential writers, mostly for his children's books set in the fictional Sítio do Picapau Amarelo (Yellow Woodpecker Farm) but he had been previously a prolific writer of fiction, a translator and an art critic. He also founded one of Brazil's first publishing houses (Companhia Editora Nacional) and was a supporter of nationalism. Lobato was born in Taubaté, São Paulo. He is best known for a set of educational but entertaining children's books, which comprise about half of his production. The other half, consisting of a number of novels and short tales for adult readers, was less popular but marked a watershed in Brazilian literature. Source: Wikipedia (en)