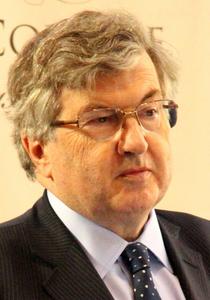 Sir Richard John Evans (born 29 September 1947) is a British historian of 19th- and 20th-century Europe with a focus on Germany. He is the author of eighteen books, including his three-volume The Third Reich Trilogy (2003–2008). Evans was Regius Professor of History at the University of Cambridge from 2008 until his retirement in 2014, and President of Cambridge's Wolfson College from 2010 to 2017. He has been Provost of Gresham College in London since 2014. Evans was appointed Knight Bachelor for services to scholarship in the 2012 Birthday Honours.
Read more or edit on Wikipedia