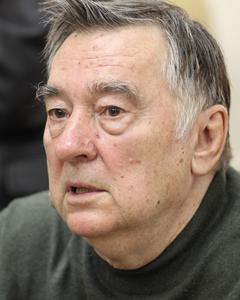 Alexander Andreyevich Prokhanov (Russian: Алекса́ндр Андре́евич Проха́нов; born 26 February 1938) is a Russian writer, a member of the secretariat of the Writers Union of the Russian Federation and the author of more than 30 novels and short story collections. He is the editor-in-chief of Russia's extreme-right (or radical-reactionary) newspaper Zavtra (Завтра, Tomorrow), that combines ultranationalist and anti-capitalist views.
Read more or edit on Wikipedia