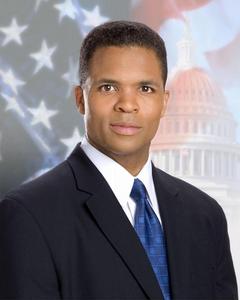 Jesse Louis Jackson Jr. (born March 11, 1965) is an American politician. He served as the U.S. Representative from Illinois's 2nd congressional district from 1995 until his resignation in 2012. A member of the Democratic Party, he is the son of activist and former presidential candidate Jesse Jackson and, prior to his career in elected office, worked for his father in both the elder Jackson's 1984 presidential campaign and his social justice, civil rights and political activism organization, Operation PUSH. Jackson's wife, Sandi Jackson, served on the Chicago City Council. He served as a national co-chairman of the 2008 Barack Obama presidential campaign. Jackson established a consistent liberal record on both social and fiscal issues, and he has co-authored books on civil rights and personal finance. In October 2012, Jackson was investigated for financial improprieties including misuse of campaign funds. Jackson resigned from Congress on November 21, 2012, citing mental and physical health problems, including bipolar disorder and gastrointestinal problems. On February 8, 2013, Jackson admitted to violating federal campaign law by using campaign funds to make personal purchases. Jackson pleaded guilty on February 20, 2013, to one count of wire and mail fraud. On August 14, 2013, he was sentenced to 30 months in federal prison. Jackson was released from prison on March 26, 2015.
Read more or edit on Wikipedia