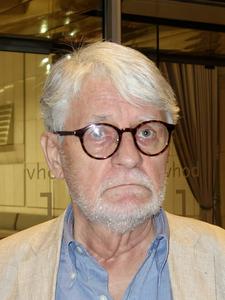 Ivo Svetina (born 9 September 1948) is a Slovene poet, playwright and translator. He has won numerous awards for his plays and poetry collections. In 1998 he was appointed Director of the National Theatre Museum of Slovenia. In 2014 he was elected President of the Slovene Writers' Association.Svetina was born in Ljubljana in 1948. He studied comparative literature at the University of Ljubljana and worked in numerous experimental theatre companies in the late 1960s and 1970s. He worked at RTV Slovenia and the Mladinsko Theatre. He won the Prešeren Foundation Award in 1988 for his poetry collection Peti rokopisi and in 2010 the Jenko Award for his poetry collection Sfingin hlev.
Read more or edit on Wikipedia