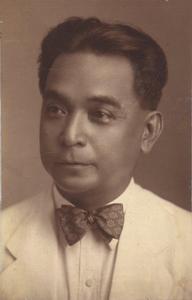 Iñigo Ed. Regalado (1 June 1888 feast day– 24 July 1976) was a Filipino poet, journalist, and novelist. He was the son of Iñigo Corcuera Regalado, the renowned Tagalog printer and journalist. His mother was Saturnina Reyes. As an editor, Iñigo Ed Regalado was one of the "powerful voices" in the newspapers and magazines during the first part of the 1900s. It was during his time when the Golden Age of the Tagalog Novel (1905–1921) started. The whole period of the Golden Age of the Tagalog Novel was from 1905 to 1935.
Read more or edit on Wikipedia