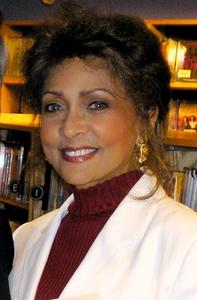 Janet Leola Langhart Cohen (née Floyd; born December 22, 1940) is an American television journalist and anchor, and author. Beginning her career as a model, she started in television reporting the weather. She serves as President and CEO of Langhart Communication. She is the spouse of former Defense Secretary William Cohen. She has written two memoirs, one with her husband. In June 2009, her one-act play Anne and Emmett, inspired by the lives of Anne Frank and Emmett Till, premiered at the United States Holocaust Museum.
Read more or edit on Wikipedia