Jay Kinney (born 1950) is an American author, editor, and former underground cartoonist. A member, along with Skip Williamson, Jay Lynch and R. Crumb, of the original Bijou Funnies crew, Kinney also edited Young Lust, a satire of romance comics, in the early 1970s with Bill Griffith. He later founded the political comic Anarchy Comics, which was published sporadically by Last Gasp between 1978 and 1987. He was also a member of the parody religion the Church of the SubGenius. Though a member of the first wave of the American underground comix movement, Kinney largely moved away from cartooning after the 1980s, first as editor of CoEvolution Quarterly from 1983 to 1984, and then as publisher and editor in chief of the magazine Gnosis from 1985 to 1999. Since the end of Gnosis, Kinney has written two books and edited an anthology, all focusing on aspects of Western esoteric traditions.
Read more or edit on Wikipedia 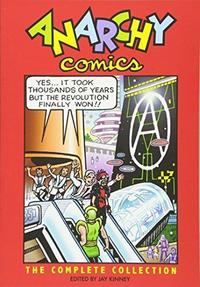