Jennifer Welsh is a Canadian researcher, writer and consultant, and was the United Nations Secretary-General’s Special Adviser on the Responsibility to Protect (2013-2015). She currently resides in Montreal, Quebec, Canada, where she is the Canada 150 Research Chair in Global Governance and Security and serves as the Director of the Centre for International Peace and Security Studies (CIPSS) at McGill University. She was previously Professor and Chair in International Relations at the European University Institute. She is a senior research fellow at Somerville College, University of Oxford. Welsh was also a professor of International Relations at the University of Oxford and co-director of the Oxford Institute for Ethics, Law and Armed Conflict at the James Martin 21st Century School. She has also served as consultant to a number of organizations including the Conference Board of Canada, McKinsey and Co, the Aspen Institute’s Business and Society Program and the Government of Canada. Welsh was born in Regina, Saskatchewan. She received her Bachelor of Arts degree from the University of Saskatchewan and then went on to become a Rhodes Scholar earning her Masters and Doctorate in International Relations from the University of Oxford. Welsh is the author of two books and co-editor of several others. Her latest book is At Home in the World: Canada's Global Vision for the 21st Century. In it, she provides an alternative vision for Canada's role in international relations and contends that Canada is a "Model Citizen" not a "Middle Power". Welsh suggests that Canada can play a major role in International policy if it provides a model for other countries to follow. Welsh delivered the 2016 CBC Massey Lectures, entitled The Return of History.
Read more or edit on Wikipedia 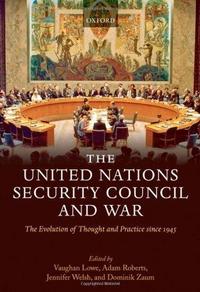 The United Nations Security Council and War: The Evolution of Thought and Practice since 1945

Effect of dose and frequency of exposure to infectious stages on trematode infection intensity and success in mussels. ( 2017 )

Parasites as prey: the effect of cercarial density and alternative prey on consumption of cercariae by four non-host species. ( 2017 )

The Use of Filter-feeders to Manage Disease in a Changing World. ( 2016 )