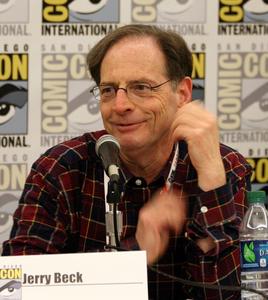 Jerry Beck (born February 9, 1955 in New York City) is an American animation historian, author, blogger, and video producer. Beck wrote or edited several books on classic American animation and classic characters, including The 50 Greatest Cartoons (1994), The Animated Movie Guide (2005), Not Just Cartoons: Nicktoons! (2007), The Flintstones: The Official Guide to the Cartoon Classic (2011), The Hanna-Barbera Treasury: Rare Art Mementos from Your Favorite Cartoon Classics (2007), The SpongeBob SquarePants Experience: A Deep Dive into the World of Bikini Bottom (2013), Pink Panther: The Ultimate Guide (2005), and Looney Tunes and Merrie Melodies: A Complete Illustrated Guide to the Warner Bros. Cartoons (with Will Friedwald, 1989) alongside The 100 Greatest Looney Tunes Cartoons (2010). He is also an authority on the making of modern films, with his books detailing the art of Mr. Peabody and Sherman, DreamWorks' Madagascar, and Bee Movie. Beck is also an entertainment industry consultant for TV and home entertainment productions and releases related to classic cartoons and operates the blog "Cartoon Research." He appears frequently as a documentary subject and audio commentator on releases of A&E's Cartoons Go to War as well as DVD collections of Looney Tunes, Popeye the Sailor, and Woody Woodpecker cartoons, on which he serves as consultant and curator.He is married to voice actress Cheryl Chase.
Read more or edit on Wikipedia