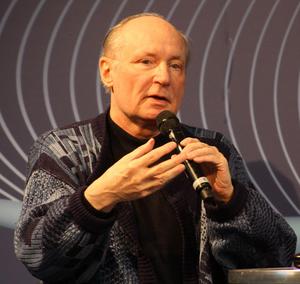 Eugen Drewermann (born 20 June 1940) is a German church critic, theologian, peace activist and former Catholic priest. His work has been translated into more than a dozen languages. Drewermann was born in Bergkamen near Dortmund. He is best known in Germany for his work toward a non-violent form of Christianity, which, he believes, requires an integration of Depth psychology into Exegesis and Theology. Trained in philosophy, theology, psychoanalysis, and comparative religious studies, he criticized the Roman Catholic Church's literal and biologistic interpretations of miracles, the virgin birth, Ascension, and Resurrection as superstitious and medieval. He called on Rome to understand biblical stories symbolically in such a way that they can become present and healing to readers today. Drewermann's controversial opinions on Catholic dogma, especially the Virgin birth of Jesus lead to a letter expressing "deep worry," in 1986 by Cardinal Ratzinger, later Pope Benedict XVI, to Drewermann's archbishop, Johannes Joachim Degenhardt. The struggle propelled Drewermann into the public limelight and culminated in 1991 after he published a radical critique of what he considers to be the Vatican's psychologically cruel and mentally enslaving clergy ideal (Kleriker: Psychogramm eines Ideals [Clergy: Psychogram of an ideal]). Archbishop Degenhardt of Paderborn and the Catholic Bishops Conference of Germany engaged in a long drawn-out and heated debate with Drewermann which was closely followed by media and public. As a consequence, on 7 October 1991, the Archbishop disallowed him to teach at the Catholic Seminary of Paderborn and, shortly afterwards, revoked his license to preach in 1992. Drewermann has uttered strong and controversial political opinions. He was against the Gulf War, the Iraq War, German participation in the NATO war against Afghanistan, and Israeli Air Raids during the 2006 Lebanon War. In the name of the German Peace Movement, he asked to abolish not only Walter Mixa's office as Military Bishop of Germany but the German military, the Bundeswehr, as such. Drewermann has signed public calls to support the "Linkspartei" and delivers speeches on conferences and protest demonstrations of the left.Drewermann left the Catholic Church on his 65th birthday on 20 June 2005, a decision he announced on Sandra Maischberger's talk show on German television.
Read more or edit on Wikipedia