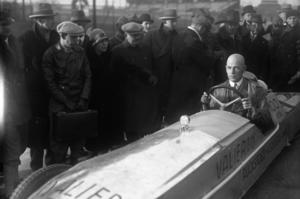 Max Valier (9 February 1895 – 17 May 1930) was an Austrian rocketry pioneer. He was a leading figure in the world's first large-scale rocket program, Opel RAK, and helped found the German Verein für Raumschiffahrt (VfR – "Spaceflight Society") that would bring together many of the minds that would later make spaceflight a reality in the 20th century.
Read more or edit on Wikipedia