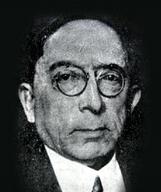 José María de la Concepción Apolinar Vargas Vila Bonilla (June 23, 1860 – May 23, 1933), commonly referred to as José María Vargas Vila, was a Colombian writer and public intellectual. Vargas Vila was an autodidact, who, from an early age, participated in political struggles as a journalist, political agitator, and orator. He was considered one of the most controversial writers in the Americas at the beginning of the twentieth century. Vargas Vila distinguished himself through his radically liberal ideas and his criticism the Catholic clergy, conservatism, and the imperialist policies of the United States. Many of his ideas approached those of existentialism and were claimed to be libertarian, although they were so close to anarchism that at one time even Vargas Vila declared himself an anarchist. He defended all causes and individuals who fought for their peoples' liberty and justice, especially in Latin America, without harping on whether they all shared his exact same philosophy, and knowing that they did not. The publication of his novel Ibis in 1900 caused him to be excommunicated by the Holy See, a development that pleased him. Source: Wikipedia (en)