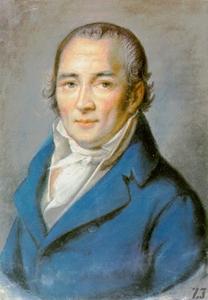 Johann Peter Hebel (10 May 1760 – 22 September 1826) was a German short story writer, dialectal poet, lutheran theologian and pedagogue, most famous for a collection of Alemannic lyric poems (Allemannische Gedichte) and one of German tales (Schatzkästlein des rheinischen Hausfreundes – "Treasure Chest of Rhenish Tales"). Born in Basel, Hebel entered primary school in 1766 and joined a Latin school three years later; he visited the schools in Basel during summer and in Hausen and Schopfheim respectively in the nearby Wiesental during winter. After the death of his mother in 1773, he remained at school, graduating with the help of friends from the Gymnasium illustre of Karlsruhe in 1778 and going on to study theology. He became a home tutor, an assistant preacher, an assistant teacher, a subdeacon and, in 1798, a professor and court deacon. Hebel was interested in botany, natural history and other subjects. His literary work began with Allemannische Gedichte, which is perhaps the most popular work written in Alemannic. He had success with his calendar stories in the Badischer Landkalender, and later with Rheinländischer Hausfreund (Rhenish Family Treasury), but a dispute between Catholics forced him to resign as editor of the calendar. In his last years he devoted himself increasingly to religion, becoming a prelate in 1819, but his wish to become a parish priest was never fulfilled. His last works were biblical stories for young readers, which served as textbooks until 1855. Hebel died 1826 in Schwetzingen. Goethe, Tolstoy, Gottfried Keller, Hermann Hesse, Martin Heidegger and other writers have praised his works.
Read more or edit on Wikipedia