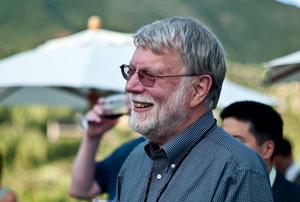 John Seely Brown (born 1940), also known as "JSB", is an American researcher who specializes in organizational studies with a particular bend towards the organizational implications of computer-supported activities. Brown served as Director of Xerox PARC from 1990 to 2000 and as Chief Scientist at Xerox from 1992 to 2002; during this time the company played a leading role in the development of numerous influential computer technologies. Brown is the co-author of The Social Life of Information, a 2000 book which analyzes the adoption of information technologies.
Read more or edit on Wikipedia