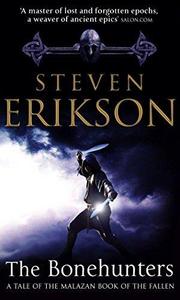 The Bonehunters is the sixth volume in Canadian author Steven Erikson's epic fantasy series, the Malazan Book of the Fallen. The Bonehunters is a direct sequel to the fourth volume, House of Chains, and alludes to events in the fifth, Midnight Tides.The novel was first published in the United Kingdom as a hardcover on 1 March 2006. The first mass-market paperback edition appeared in April 2007. The first United States edition was published in September 2007.
Read more or edit on Wikipedia