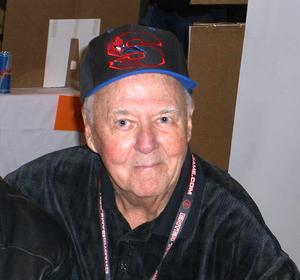 Joseph Leonard Sinnott (; October 16, 1926 – June 25, 2020) was an American comic book artist. Working primarily as an inker, Sinnott is best known for his long stint on Marvel Comics' Fantastic Four, from 1965 to 1981 (and briefly in the late 1980s), initially over the pencils of Jack Kirby. During his 60 years as a Marvel freelance artist and then salaried artist working from home, Sinnott inked virtually every major title, with notable runs on The Avengers, The Defenders, and Thor. In the mid-2000s, Stan Lee cited Sinnott as the company's most in-demand inker, saying jocularly, "[P]encilers used to hurl all sorts of dire threats at me if I didn't make certain that Joe, and only Joe, inked their pages. I knew I couldn't satisfy everyone and I had to save the very most important strips for [him]. To most pencilers, having Joe Sinnott ink their artwork was tantamount to grabbing the brass ring." Sinnott's art appeared on two US Postal Service commemorative stamps in 2007, and he continued to ink The Amazing Spider-Man Sunday comic strip until his retirement in 2019.
Read more or edit on Wikipedia