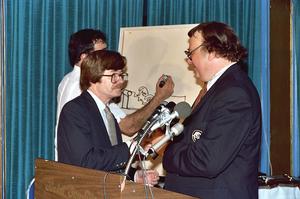 Archie Goodwin (September 8, 1937 – March 1, 1998) was an American comic book writer, editor, and artist. He worked on a number of comic strips in addition to comic books, and is best known for his Warren and Marvel Comics work. For Warren he was chief writer and editor of landmark horror anthology titles Creepy and Eerie between 1964 and 1967. At Marvel, he served as the company's editor-in-chief from 1976 to the end of 1977. In the 1980s, he edited the publisher's anthology magazine Epic Illustrated and its Epic Comics imprint. He is also known for his work on Star Wars in both comic books and newspaper strips. He is regularly cited as the "best-loved comic book editor, ever."
Read more or edit on Wikipedia