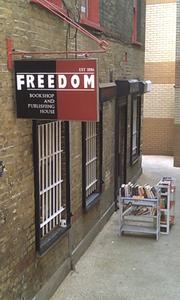 Freedom Press is an anarchist publishing house and bookseller in Whitechapel, London, United Kingdom. Founded in 1886, it is the largest anarchist publishing house in the country and the oldest of its kind in the English speaking world. It is based at 84b Whitechapel High Street in the East End of London. Alongside its many books and pamphlets, the group also runs a news and comment-based website and until recently regularly published Freedom, which was the only regular anarchist newspaper published nationally in the UK. The collective took the decision to close publication of the full newspaper in March 2014, with the intention of moving most of its content online and switching to a less regular freesheet for paper publication.Other regular publications by Freedom Press have included Freedom Bulletin, Spain and the World, Revolt! and War Commentary.
Read more or edit on Wikipedia