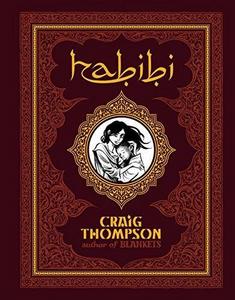 Habibi is a black-and-white graphic novel by Craig Thompson published by Pantheon in September 2011. The 672-page book is set in a fictional Islamic landscape with "fairy-tale imagery", and depicts the relationship between Dodola and Zam, two escaped child slaves, who are torn apart and undergo many transformations as they grow into new names and new bodies, which prove to be obstacles to their love when they later reunite. The book's website describes its concept as a love story and a parable about humanity's relationship to the natural world that explores themes such as the cultural divide between first world countries and third world countries, and the commonality between Christianity and Islam.While it has been lauded by publications such as Time, Elle, Salon, NPR and reviewers for the beauty of its visual design and epic setting, it has also been criticized for misrepresenting various elements such as sexuality and its depiction of Arabic culture.
Read more or edit on Wikipedia