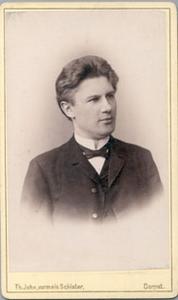 Reinhold Seeberg (24 March 1859 – 23 October 1935) was a German Lutheran theologian. He was a professor or theology at Erlangen, where he had studied, and then in 1893 a Professor of dogmatic theology at Friedrich Wilhelm University (founded as the University of Berlin in 1810). A staunch German nationalist, Seeberg affirmed the divinely appointed role of Germany in the salvation of the world, and did not support the Weimar Republic in Germany. Seeberg was part of the movement for the modern revival of Luther and Reformation studies, including the repositioning of Martin Bucer as a mediating theologian between Lutheran and Reformed thought. His son, Erich Seeberg, became a significant theologian in his own right at the University of Berlin. His brother, Alfred Seeberg, was also a theologian.
Read more or edit on Wikipedia