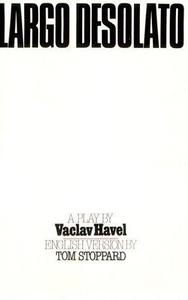 Largo Desolato is a semi-autobiographical play by Václav Havel about a political dissident, Leopold Nettles (originally in Czech Kopřiva), who fears being sent to prison for his writing. Leopold faces mounting pressure from his friends, admirers and colleagues; these pressures in addition to ongoing state surveillance have made him incapable of writing anything further. The play is dedicated to Czech-born playwright Tom Stoppard, who translated the play into English for its world premiere in Bristol, England, in 1986. Havel is reported to have written this play in the days following his release from prison in 1984. Largo Desolato was listed in The Telegraph as one of the 15 greatest plays of all time.
Read more or edit on Wikipedia