Christoph Luxenberg is the pseudonym of the author of The Syro-Aramaic Reading of the Koran: A Contribution to the Decoding of the Language of the Qur'an (German edition 2000, English translation 2007) and several articles in anthologies about early Islam. His book The Syro-Aramaic Reading of the Koran asserted that the language of the early compositions of the Quran was not exclusively Arabic, as assumed by the classical commentators, but rather is rooted in the Syriac language of the 7th century Meccan tribe of the Quraysh, which is associated in the early histories with the founding of the religion of Islam. Luxenberg's premise is that the Syriac language, which was prevalent throughout the Middle East during the early period of Islam, and was the language of culture and Christian liturgy, had a profound influence on the scriptural composition and meaning of the contents of the Quran.
Read more or edit on Wikipedia 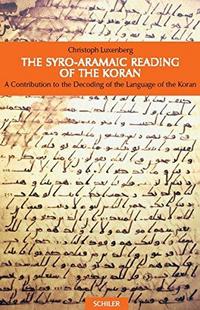 The Syro-Aramaic Reading of the Koran