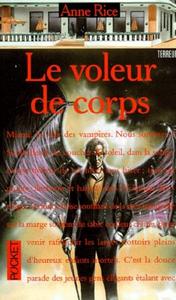 The Tale of the Body Thief

The Tale of the Body Thief is a horror novel by American writer Anne Rice, the fourth in her The Vampire Chronicles series, following The Queen of the Damned (1988). Published in 1992, it continues the adventures of Lestat, specifically his efforts to regain his lost humanity during the late 20th century. Chapters from the book appeared in the October 1992 issue of Playboy.
Read more or edit on Wikipedia