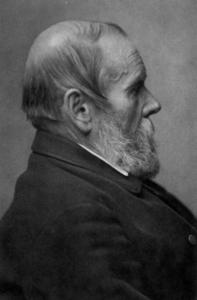 Friedrich Theodor Vischer (German: [ˈfɪʃɐ]; 30 June 1807 – 14 September 1887) was a German novelist, poet, playwright, and writer on the philosophy of art. Today, he is mainly remembered as the author of the novel Auch Einer, in which he developed the concept of Die Tücke des Objekts (the spite of objects), a comic theory that inanimate objects conspire against humans.
Read more or edit on Wikipedia