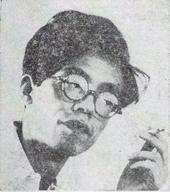 Futaro Yamada (山田 風太郎, Yamada Fūtarō, January 4, 1922 – July 28, 2001) was the pen name of Seiya Yamada (山田 誠也, Yamada Seiya), a Japanese author. He was born in Yabu, Hyogo. In 1947, he wrote a mystery short story Daruma-tōge no Jiken (達磨峠の事件, lit. "The Incident on Dharma Pass") and was awarded a prize by the magazine Houseki (宝石). He was discovered by Edogawa Rampo and became a novelist. He wrote many ninja (忍法帖 Ninpōchō series) and mystery stories. Many of his works have been adapted for film, TV, manga, and anime. Source: Wikipedia (en)