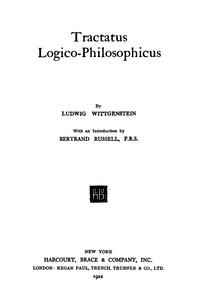 The Tractatus Logico-Philosophicus (widely abbreviated and cited as TLP) (Latin for Logical Philosophical Treatise or Treatise on Logic and Philosophy) is the only book-length philosophical work by the Austrian philosopher Ludwig Wittgenstein that was published during his lifetime. The project had a broad goal: to identify the relationship between language and reality and to define the limits of science. It is recognized by philosophers as a significant philosophical work of the twentieth century. G. E. Moore originally suggested the work's Latin title as homage to the Tractatus Theologico-Politicus by Baruch Spinoza.Wittgenstein wrote the notes for the Tractatus while he was a soldier during World War I and completed it during a military leave in the summer of 1918. It was first published in German in 1921 as Logisch-Philosophische Abhandlung. The Tractatus was influential chiefly amongst the logical positivist philosophers of the Vienna Circle, such as Rudolf Carnap and Friedrich Waismann. Bertrand Russell's article "The Philosophy of Logical Atomism" is presented as a working out of ideas that he had learned from Wittgenstein.The Tractatus employs an austere and succinct literary style. The work contains almost no arguments as such, but rather consists of declarative statements, or passages, that are meant to be self-evident. The statements are hierarchically numbered, with seven basic propositions at the primary level (numbered 1–7), with each sub-level being a comment on or elaboration of the statement at the next higher level (e.g., 1, 1.1, 1.11, 1.12, 1.13). In all, the Tractatus comprises 526 numbered statements. Wittgenstein's later works, notably the posthumously published Philosophical Investigations, criticised many of his earlier ideas in the Tractatus.
Read more or edit on Wikipedia