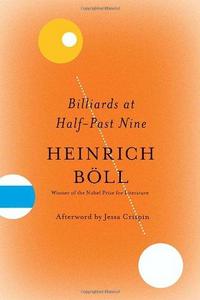 Billiards at Half-Past Nine (German: Billard um halb zehn) is a 1959 novel by the German author Heinrich Böll. The entirety of the narrative takes place on a day in the fall of 1958, with flashbacks, and characters' retellings from memory by the characters. It focuses on the Faehmel family's history, from the end of the 19th century, until that day; it largely reflects the opposition of the author (who won the Nobel Prize for Literature in 1972) had to the period of Nazism, as well as his aversion to war in general.
Read more or edit on Wikipedia