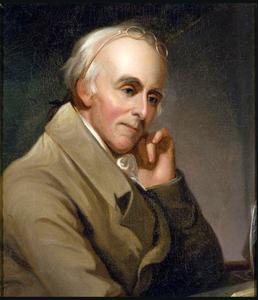 Benjamin Rush (January 4, 1746 [O.S. December 24, 1745] – April 19, 1813) was a Founding Father of the United States who signed the United States Declaration of Independence, and a civic leader in Philadelphia, where he was a physician, politician, social reformer, humanitarian, educator, and the founder of Dickinson College. Rush was a Pennsylvania delegate to the Continental Congress. His later self-description there was: "He aimed right." He served as surgeon general of the Continental Army and became a professor of chemistry, medical theory, and clinical practice at the University of Pennsylvania.Rush was a leader of the American Enlightenment and an enthusiastic supporter of the American Revolution. He was a leader in Pennsylvania's ratification of the U.S. Constitution in 1788. He was prominent in many reforms, especially in the areas of medicine and education. He opposed slavery, advocated free public schools, and sought improved education for women and a more enlightened penal system. As a leading physician, Rush had a major impact on the emerging medical profession. As an Enlightenment intellectual, he was committed to organizing all medical knowledge around explanatory theories, rather than rely on empirical methods. Rush argued that illness was the result of imbalances in the body's physical system and was caused by malfunctions in the brain. His approach prepared the way for later medical research, but Rush undertook none of it. He promoted public health by advocating clean environment and stressing the importance of personal and military hygiene. His study of mental disorder made him one of the founders of American psychiatry. In 1965, the American Psychiatric Association recognized Rush as the "father of American psychiatry".
Read more or edit on Wikipedia