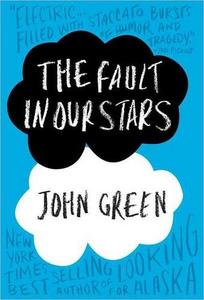 The Fault in Our Stars

The Fault in Our Stars is a novel by John Green. It is his fourth solo novel, and sixth novel overall. It was published on January 10, 2012. The title is inspired by Act 1, Scene 2 of Shakespeare's play Julius Caesar, in which the nobleman Cassius says to Brutus: "The fault, dear Brutus, is not in our stars, / But in ourselves, that we are underlings." The story is narrated by Hazel Grace Lancaster, a 16-year-old girl with thyroid cancer that has affected her lungs. Hazel is forced by her parents to attend a support group where she subsequently meets and falls in love with 17-year-old Augustus Waters, an ex-basketball player and amputee. An American feature film adaptation of the novel directed by Josh Boone and starring Shailene Woodley, Ansel Elgort, and Nat Wolff was released on June 6, 2014. A Hindi feature film adaptation is set to be released in May 2020. Both the book and its American film adaptation were met with strong critical and commercial success.
Read more or edit on Wikipedia