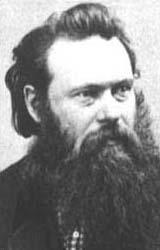 Alexander Gardner (October 17, 1821 – December 10, 1882) was a Scottish photographer who immigrated to the United States in 1856, where he began to work full-time in that profession. He is best known for his photographs of the American Civil War, U.S. President Abraham Lincoln, and the execution of the conspirators to Lincoln's assassination.
Read more or edit on Wikipedia