Lorna Margaret Arnold (née Rainbow; 7 December 1915 – 25 March 2014) was a British historian who wrote a number of books connected with the British nuclear weapons programmes. A graduate of Bedford College, London, she trained as a teacher at the Cambridge Training College for Women, but left teaching in 1940. During the Second World War, she served with the Army Council secretariat. In 1944, she transferred to the Foreign Office to head a section of the secretariat of the European Advisory Commission. In June 1945, she moved to Berlin as part of the Allied Control Council, working in the Economic Directorate alongside counterparts from France, America and Russia to co-ordinate administering the districts and supplying food to the population. She was posted to Washington, D.C., in November 1946 as part of the British negotiating team that agreed to merge the U.S. and British zones of Allied-occupied Germany into Bizonia, and remained at the Pentagon until 1949. In January 1959, she joined the United Kingdom Atomic Energy Authority (UKAEA), where she worked within its Authority Health and Safety Branch (AHSB), coordinating the investigation of the 1957 Windscale fire, about which she would later write a book. In 1967, she joined Margaret Gowing in writing the history of the British nuclear weapons programmes. As its second official historian, she had access to previously secret documents and personally knew many of the people involved. She produced histories of the 1957 Windscale fire, the nuclear weapons tests in Australia and the British hydrogen bomb programme. In her old age she was still an active participant in intelligence/historical community debate.
Read more or edit on Wikipedia

Britain, Australia and the Bomb 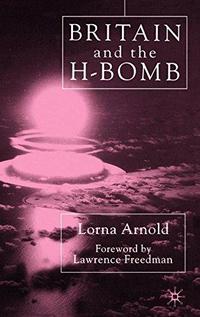 Britain and the H-Bomb