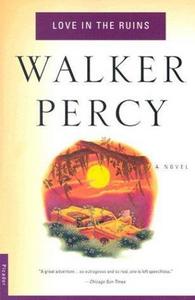 Love in the Ruins

Love in the Ruins (subtitle:The Adventures of a Bad Catholic at a Time Near the End of the World) is a novel of speculative or science fiction by author Walker Percy from 1971. It follows its main character, Dr Thomas More, namesake and descendant of Sir Thomas More (author of Utopia), a psychiatrist in a small town in Louisiana called Paradise. Over time, the U.S. has become progressively more fragmented between left and right, black and white, as social trends of the 1960s run to their logical extremes. Society begins to come apart at the seams, and no one except More seems to notice, and no one, including him, seems particularly to care. More, a lapsed Catholic, alcoholic, and womanizer, invents a device that he names the Ontological Lapsometer, which can diagnose and treat the harmful mental states at the root of society's slow disintegration. However, in the wrong hands, the device can also exacerbate the problems, and a government representative, intent on getting More a Nobel Prize, seeks to put it to his own uses while More attempts to prevent a disaster.
Read more or edit on Wikipedia

original title: Love in the Ruins
language: English
date of publication: 1971
followed by: The Thanatos Syndrome