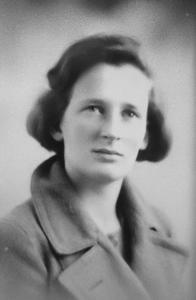 Margaret Mary Gowing (née Elliott), (26 April 1921 – 7 November 1998) was an English historian. She was involved with the production of several volumes of the officially sponsored History of the Second World War, but was better known for her books, commissioned by the United Kingdom Atomic Energy Authority, covering the early history of Britain's nuclear weapons programmes: Britain and Atomic Energy 1939–1945, published in 1964, and the two-volume Independence and Deterrence: Britain and Atomic Energy 1945–52, published in 1974. Through her work in the Cabinet Office from 1945 to 1959, she knew personally many of the people involved. As historian archivist at the UK Atomic Energy Authority from 1959 to 1966 she had access to the official papers and files of the British nuclear weapons programmes. She was the first occupant of a chair in the history of science at the University of Oxford, which she held from 1972 until her retirement in 1986. As co-founder with physicist Nicholas Kurti of the Contemporary Scientific Archives Centre in Oxford, she helped ensure the preservation of contemporary scientific manuscripts.
Read more or edit on Wikipedia