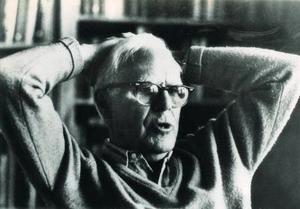 Martin Gardner (October 21, 1914 – May 22, 2010) was an American popular mathematics and popular science writer with interests also encompassing scientific skepticism, micromagic, philosophy, religion, and literature—especially the writings of Lewis Carroll, L. Frank Baum, and G. K. Chesterton. He was also a leading authority on Lewis Carroll. The Annotated Alice, which incorporated the text of Carroll's two Alice books, was his most successful work and sold over a million copies. He had a lifelong interest in magic and illusion and in 1999, MAGIC magazine named him as one of the "100 Most Influential Magicians of the Twentieth Century". He was considered the doyen of American puzzlers. He was a prolific and versatile author, publishing more than 100 books.Gardner was best known for creating and sustaining interest in recreational mathematics—and by extension, mathematics in general—throughout the latter half of the 20th century, principally through his "Mathematical Games" columns. These appeared for twenty-five years in Scientific American, and his subsequent books collecting them.Gardner was one of the foremost anti-pseudoscience polemicists of the 20th century. His 1957 book Fads and Fallacies in the Name of Science, originally published in 1952 as In the Name of Science: An Entertaining Survey of the High Priests and Cultists of Science, Past and Present, became a classic and seminal work of the skeptical movement. In 1976, he joined with fellow skeptics to found CSICOP, an organization promoting scientific inquiry and the use of reason in examining extraordinary claims.He was a frequent contributor to The New York Review of Books.
Read more or edit on Wikipedia