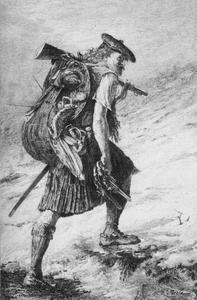 Waverley; or, 'Tis Sixty Years Since is a historical novel by Walter Scott (1771–1832). Scott was already famous as a poet, and chose to publish it anonymously in 1814 as his first venture into prose fiction. It is often regarded as one of the first historical novels in the Western tradition. Edward Waverley, an English gentleman of honour, chooses an occupation in the army at the time just before the Jacobite uprising of 1745 on advice of his father. He has an officer's commission. On leave from army training, he visits friends of his family in Scotland, as he is not far from their place. He enjoys their Scottish hospitality. His head is full of the romantic notions of his unstructured education, including much reading, and he is startled to find himself in the midst of loyalists who support the return of the House of Stuart and the Stuart prince, known as Bonnie Prince Charlie and the Young Chevalier to his supporters and as the Younger Pretender to his foes. His honour is often challenged as others interfere to push him to the Stuart side, where he is in battle, and he meets two women with whom he falls in love in turn, until he chooses one. His gentlemanly actions gain him friends in this precarious situation, on both sides of the uprising, who stand him in good stead when he is at risk from his own government when the uprising is put down. Scott chose to publish his later novels as being "by the author of Waverley". His series of works on similar themes written during the same period have become collectively known as the "Waverley Novels". The novel was well-received by contemporary critics, and well-liked by those who purchased novels in the early 19th century. It has continued in favour with later critics. In 1818 Scott was granted a baronetcy, becoming Sir Walter Scott. It was an open secret that he was "the author of Waverley", and he admitted this at a public dinner in 1827.
Read more or edit on Wikipedia