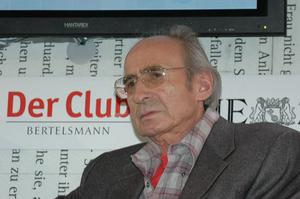 Peter Rühmkorf (25 October 1929 – 8 June 2008) was a German writer who significantly influenced German post-war literature.Rühmkorf's literary career started in 1952 in Hamburg with the magazine Zwischen den Kriegen ("Between the Wars"), which the poet and essayist Werner Riegel and he edited and mainly wrote, until Riegel's early death in 1956. Both of them belonged to the initiators of the Studentenkurier, an influential monthly for young German intellectuals and students. Rühmkorf was awarded every important German award, including the Georg Büchner Prize, the Heinrich Heine Prize and the Erich Kästner Prize. Rühmkorf was also among the four who were ever awarded with the Arno Schmidt Prize. His pseudonyms were Leo Doletzki, Leslie Maier, Johannes Fontara, Lyng, John Frieder, Hans-Werner Weber, Harry Flieder, and Hans Hingst. His voice can be heard on: Früher, als wir die großen Ströme noch ... (suite for speaker and ensemble) with Dietmar Bonnen and Andreas Schilling. On stage and on record he was accompanied by jazz musicians Michael Naura on piano and Wolfgang Schlüter on vibes for more than 30 years.
Read more or edit on Wikipedia