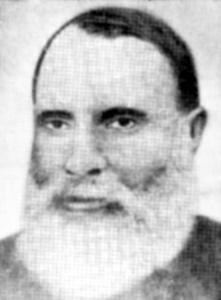 Mir Mosharraf Hossain (Bengali: মীর মশাররফ হোসেন; 1847–1912) was a Bengali writer, novelist, playwright and essayist. He is considered to be the first major writer to emerge from the Muslim society of Bengal, and one of the finest prose writers in the Bengali language. His magnum opus Bishad Sindhu (Ocean of Sorrow) is a popular classic among the Bengali readership.
Read more or edit on Wikipedia