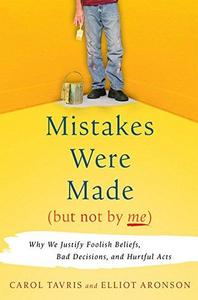 Mistakes Were Made (But Not by Me) is a non-fiction book by social psychologists Carol Tavris and Elliot Aronson, first published in 2007. It deals with cognitive dissonance, confirmation bias and other cognitive biases, using these psychological theories to illustrate how the perpetrators (and victims) of hurtful acts justify and rationalize their behavior. It describes a positive feedback loop of action and self-deception by which slight differences between people's attitudes become polarized.
Read more or edit on Wikipedia

Timmy Failure: Mistakes Were Made

Mistakes Were Made (But Not by Me)