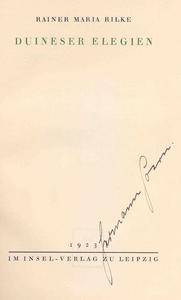 The Duino Elegies (German: Duineser Elegien) are a collection of ten elegies written by the Bohemian-Austrian poet Rainer Maria Rilke (1875–1926). Rilke, who is "widely recognized as one of the most lyrically intense German-language poets", began writing the elegies in 1912 while a guest of Princess Marie von Thurn und Taxis (1855–1934) at Duino Castle, near Trieste on the Adriatic Sea. The poems, 859 lines long in total, were dedicated to the Princess upon their publication in 1923. During this ten-year period, the elegies languished incomplete for long stretches of time as Rilke suffered frequently from severe depression—some of which was caused by the events of World War I and being conscripted into military service. Aside from brief episodes of writing in 1913 and 1915, Rilke did not return to the work until a few years after the war ended. With a sudden, renewed inspiration—writing in a frantic pace he described as a "boundless storm, a hurricane of the spirit"—he completed the collection in February 1922 while staying at Château de Muzot in Veyras, in Switzerland's Rhone Valley. After their publication in 1923 and Rilke's death in 1926, the Duino Elegies were quickly recognized by critics and scholars as his most important work.The Duino Elegies are intensely religious, mystical poems that weigh beauty and existential suffering. The poems employ a rich symbolism of angels and salvation but not in keeping with typical Christian interpretations. Rilke begins the first elegy in an invocation of philosophical despair, asking: "Who, if I cried out, would hear me among the hierarchies of angels?" (Wer, wenn ich schriee, hörte mich denn aus der Engel Ordnungen?) and later declares that "every angel is terrifying" (Jeder Engel ist schrecklich). While labelling of these poems as "elegies" would typically imply melancholy and lamentation, many passages are marked by their positive energy and "unrestrained enthusiasm". Together, the Duino Elegies are described as a metamorphosis of Rilke's "ontological torment" and an "impassioned monologue about coming to terms with human existence" discussing themes of "the limitations and insufficiency of the human condition and fractured human consciousness ... man's loneliness, the perfection of the angels, life and death, love and lovers, and the task of the poet".Rilke's poetry, and the Duino Elegies in particular, influenced many of the poets and writers of the twentieth century. In popular culture, his work is frequently quoted on the subject of love or of angels and referenced in television programs, motion pictures, music and other artistic works, in New Age philosophy and theology, and in self-help books.
Read more or edit on Wikipedia

on Wikisource
add to my inventory
selling