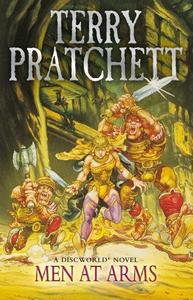 Men at Arms is a fantasy novel by British writer Terry Pratchett, the 15th book in the Discworld series, first published in 1993. It is the second novel about the Ankh-Morpork City Watch on the Discworld. Lance-constable Angua von Überwald, later in the series promoted to the rank of Sergeant, is introduced in this book. Lance-constable (in the course of the novel promoted to Acting-constable) Detritus is introduced as a new member of the watch as well, though he had already appeared in other Discworld novels, most notably in Moving Pictures. Also notable is the only appearance of Lance-constable Cuddy (also promoted to Acting-constable).
Read more or edit on Wikipedia