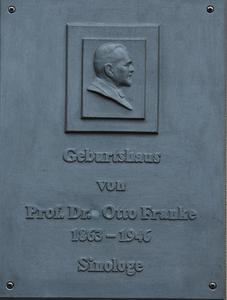 Otto Franke (Chinese: 福蘭閣; pinyin: Fúlángé; 27 September 1863 – 5 August 1946) was a German diplomat, sinologist, and historian. He was the preeminent German sinologist of his time, called the "Nestor of German Sinology" by Hellmut Wilhelm. He served as a diplomat at the German embassy to the Qing empire for 13 years, before becoming the inaugural Sinology Chair at the University of Hamburg and then at the University of Berlin. His five-volume Geschichte des Chinesischen Reiches (History of the Chinese Empire), though unfinished because of World War II, remains the standard history of China in Germany decades after its publication. His son Wolfgang Franke was also a well-known sinologist who succeeded him as the Sinology Chair at Hamburg.
Read more or edit on Wikipedia