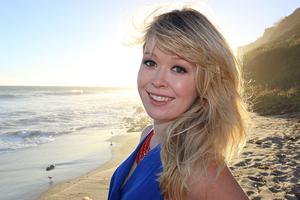 Nadine Jolie Courtney (née Haobsh; born August 23, 1980) is a American lifestyle writer, novelist, and former media personality. She is the author of the YA novel All-American Muslim Girl, Romancing the Throne, Beauty Confidential: The No Preaching, No Lies, Advice-You'll-Actually-Use-Guide to Looking Your Best, and Confessions of a Beauty Addict. Her blog "Jolie in NYC" received international press in 2005 after Courtney, a former beauty editor, was outed and dooced for anonymously blogging about the beauty industry. The New York Post subsequently dubbed her "the poster girl for the blogger generation".In 2015, she appeared on season 2 of Bravo's reality documentary television series Newlyweds: The First Year alongside her husband, filmmaker Erik Courtney.
Read more or edit on Wikipedia