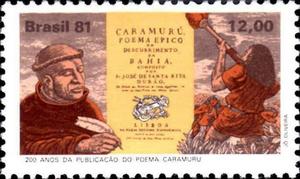 José de Santa Rita Durão (1722–1784), known simply as Santa Rita Durão, was a Colonial Brazilian Neoclassic poet, orator and Augustinian friar. He is considered a forerunner of "Indianism" in Brazilian literature, with his epic poem Caramuru. He is the correspondent patron of the 9th chair of the Brazilian Academy of Letters.
Read more or edit on Wikipedia