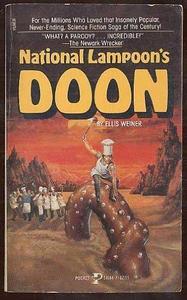 National Lampoon's Doon is a parody of Frank Herbert's 1965 science fiction novel Dune, written by Ellis Weiner and published in 1984 by Pocket Books for National Lampoon. It was reprinted by Grafton Books (ISBN 0-586-06636-5) in 1985. In 1988 William F. Touponce called the book "something of a tribute to Herbert's success on college campuses", noting that "the only other book to have been so honored is Tolkien's Lord of the Rings," which was parodied by The Harvard Lampoon in 1969.Dune is set on the dangerous, sandworm-ridden desert planet Arrakis, sole source of the spice melange, the most valuable substance in the universe. The parody follows a similar storyline, wherein rival restaurant-owning families battle for control of Arruckus, which is overrun by giant pretzels and the source of valuable beer.
Read more or edit on Wikipedia