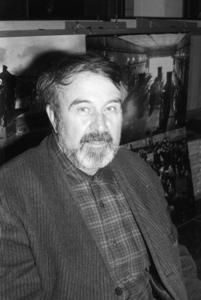 Lothar-Günther Buchheim (listen ) (February 6, 1918 – February 22, 2007) was a German author, painter and Nazi propagandist. In World War II he served as a war correspondent aboard ships and U-boats. He is best known for his 1973 novel Das Boot (The Boat), which became an international bestseller and was adapted in 1981 as an Oscar-nominated film. His artworks, collected in a gallery on the banks of the Starnberger See, range from heavily decorated cars to a variety of mannequins seated or standing as if themselves visitors to the gallery, thus challenging the division between visitor and art work.
Read more or edit on Wikipedia