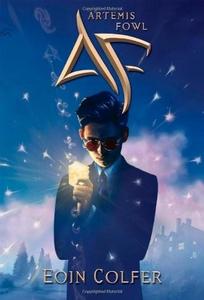 Artemis Fowl is an Irish young adult fantasy novel written by Irish author Eoin Colfer. It is the first book in the Artemis Fowl series, followed by Artemis Fowl: The Arctic Incident. Described by its author as "Die Hard with fairies", it follows the adventures of Artemis Fowl, a twelve-year-old criminal mastermind, as he kidnaps a fairy (Holly Short) for a large ransom of gold. Throughout the book, the third-person narration switches from following the human characters to following the fairy characters to present underlying themes of greed and conflict. The book received a mostly favourable critical response and several awards. A film adaptation titled Artemis Fowl was released on Disney+ on 12 June 2020.
Read more or edit on Wikipedia