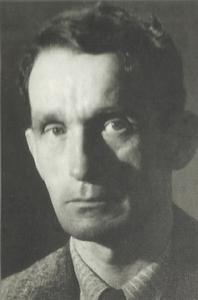 Sergiusz Piasecki (Polish pronunciation: [ˈsɛrɡʲuʂ pjaˈsɛt͡skʲi]; 1901 in Lachowicze near Baranowicze – 1964 in Penley, London) was one of the best known Belarusian-Polish writers of the mid 20th century. He was mainly portraying life of criminals and lowlifes of Minsk, which he knew very well, as well as work of Polish spies in Soviet Union and later the anti-Nazi conspiracy in Wilno; he had personal experience in both matters. His novel written in prison, Lover of the Great Bear, published in 1937, was the third most popular novel in the Second Polish Republic. Following World War II, Piasecki's books were banned by communist censorship in the People's Republic of Poland. After the collapse of the Soviet Union, in early 1990s, Lover of the Great Bear became again one of the best selling books in the country according to Rzeczpospolita daily newspaper. His other novel, an Anti-Soviet satire The Memoirs of a Red Army Officer, had already been reprinted several times.
Read more or edit on Wikipedia